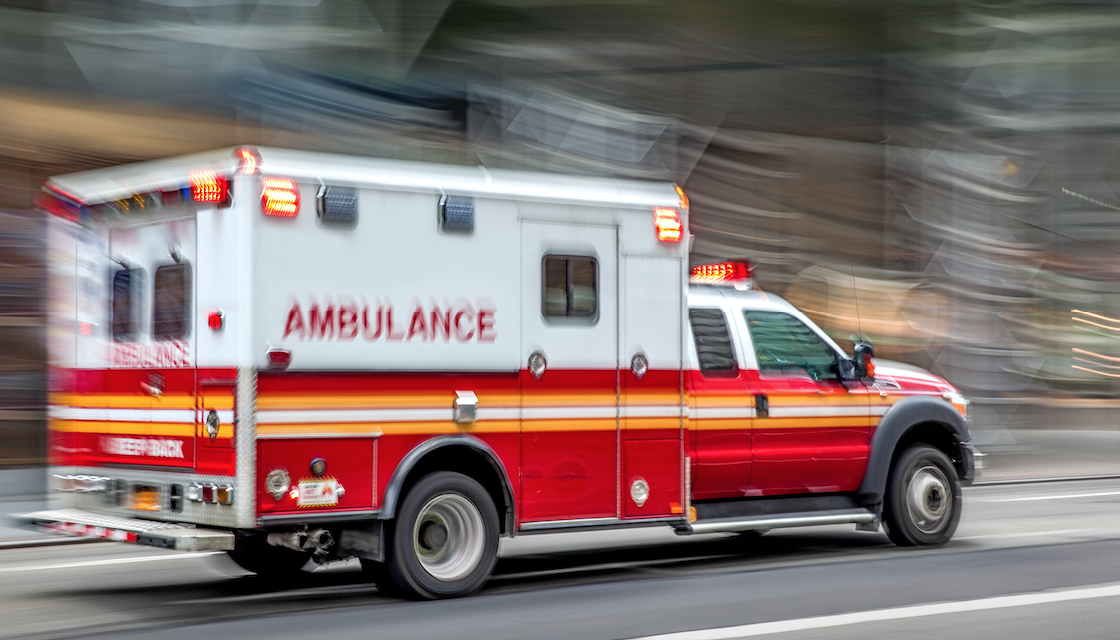 Guest Skeptic: Mike Carter is a former paramedic and current PA practicing in pulmonary and critical care as well as an adjunct professor of emergency medical services at Tacoma Community College.

Case: During a busy emergency department (ED) shift the paramedic phone rings.  On the other end of the line is one of your local crews who have responded to a 54-year-old male with a witnessed cardiac arrest.  CPR is currently in progress with a single shock having been delivered.  The crew is asking if they should transport the patient with resuscitation ongoing?

Background: Out-of-hospital cardiac arrest (OHCA) is something we have covered extensively on the SGEM over the years. This has included things like therapeutic hypothermia (SGEM#54, SGEM#82, SGEM#183 and SGEM#275), supraglottic devices (SGEM#247), crowd sourcing CPR (SGEM#143 and SGEM#306), and epinephrine (SGEM#238).

One aspect we have not looked at is the “load and go” vs. “stay and play” approach for OHCA. Different countries have different approaches to this problem. There is the European model that is physician led and provides more care in the field while the North American model tends to scoop and run. However, there is a fair bit of heterogeneity between EMS systems even in the US. In patients with OHCA, some EMS agencies transport almost all patients regardless of ROSC, while others rarely transport if ROSC is not achieved.

It is unclear from the existing literature which practice is superior to the other in providing patient-oriented benefit to among adult patients in refractory arrest who have suffered an OHCA.

Clinical Question: What is the association of intra-arrest transport compare to continued on-scene resuscitation in regards to survival to hospital discharge in adult patients with an OHCA?

Key Results: The entire cohort consisted of 43,969 patients with a median age of 67 years, 1/3 were female and ½ were bystander or EMS witnessed. Of these OHCAs, 22% had an initial shockable rhythm and ¼ underwent intra-arrest transport.

The probability of survival was greater with continuous on-scene resuscitation compared to intra-arrest transport in adults with OHCAs.

1) Association: The biggest limitation of study design is its observational nature. This means we can only conclude an association, not causation. Propensity score matching can help but is not able to eliminate unmeasured confounders that could bias the results.

There were some details that should be explained about propensity matching. The initial cohort composed of greater than 57,000 patients with 13,756 were excluded due to a variety of reasons. In addition, only 18,812 underwent 1:1 propensity score matching (9,406 in each arm) with ~25,000 going unmatched.  Of these, 16,264 had no satisfactory match available. The end result is that it wasn’t 57,000 adult patients with OHCA whose propensity score were matched but rather less than 50% (9,406 intra-arrest transport and 18,299 on-scene resuscitation).

These details are another reason why we need to be careful not to over-interpret the data that stay and play is superior to load and go. 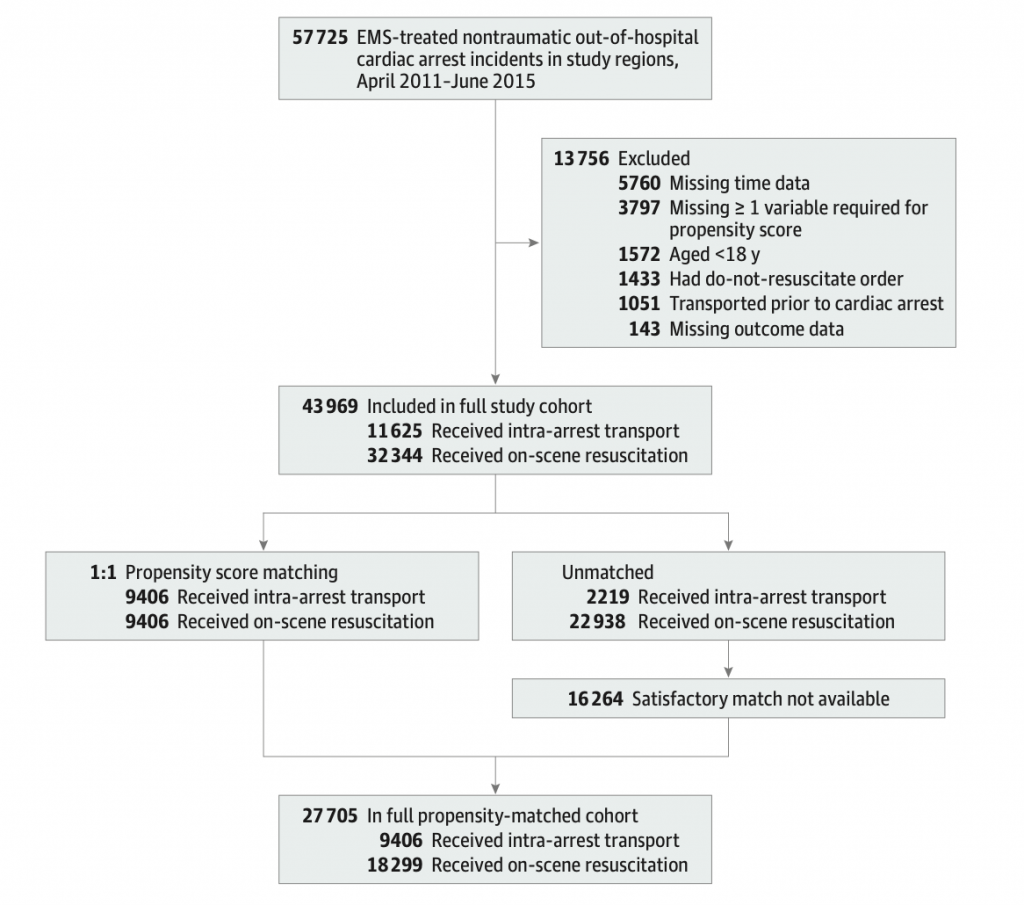 2) Older Data: These results were based on older data from April 2011 to June 2015. This time frame was selected for a couple of reasons. Prior to April 2011, there were differences in data definition. Only including data from April 2011 forward minimizes this issue. The stop data of June 2015 was because the ROC registry was discontinued at that time.

I do not think that older data would significantly impact the results of this study. We do not have been interventions that have demonstrated to have a patient-oriented outcome (POO) in patients with OHCA. There is the classic OPALS study by the Legend of EM Dr. Ian Steill on ACLS vs BLS (SGEM#64) showing no statistical difference in survival to hospital discharge (5.1% vs 5.0%).  We also mentioned things like pre-hospital therapeutic hypothermia, supraglottic devices, crowd sourcing CPR, epinephrine in the background section not resulting in a clinical benefit. The SGEM has also covered IV vs IO (SGEM#231) and amiodarone vs lidocaine (SGEM#162). Neither of these two studies were high-quality evidence demonstrating a superior strategy for a POO.

It was ~2010 that the major emphasis towards high efficiency CPR started to get pushed in the prehospital arena.  ROC data has shown a gradual uptick in survival from OHCA, although this is in the realm of ~1% from 2011 – 2015 [5].  However, looking at CARES registry data there has been no change

3) Mechanical CPR: No data was presented on mechanical CPR utilization. There is some literature regarding better hemodynamics, chest compression fraction etc. with mechanical devices during transport.

However, there is no evidence that mechanical CPR results in a POO. We covered this on SGEM#136 with REBEL EM and we even debated the issue at SMACC. That does not mean there could not be other benefits to mechanical CPR such as safety for EMS personnel. However, this claim would need to be demonstrated and is it any better than a special harness to secure paramedics while performing CPR in the back of the ambulance on transport.

CPR has to be a bridge to somewhere. Adults patients with OHCA and non-shockable rhythms have a very poor prognosis. Prolonged CPR is associated with worse probability of survival with good neurologic outcome [6].

4) Prognostication Bias: This is not a specific bias that we have discussed before in detail on the SGEM. However, we the discussed general idea of bias multiple times on the SGEM. I define bias as something that systematically moves us away from the “truth” (best point estimate of effect size).

The domain of prognostication bias recognized in this observational study by the authors was a potential for attrition bias. Those adult patients with OHCA and unfavorable phenotypes may (may not) have had resuscitation terminated early. This means they would not have the opportunity to achieve ROSC.

They did document a difference in out-of-hospital termination of resuscitation. It was 0.2% of intra-arrest transport compared to 56.7% for the on-scene resuscitation for the full cohort. Similar results were observed in the propensity matched analysis. This could potentially have biased the results.

5) External Validity: We mentioned in the background material that different countries have either a physician led or non-physician led EMS system. There are even differences within countries whether or not policies exist to transport all patients depending on if ROSC is achieved.  This database was heterogenous because the medical care was carried out per local protocols, including decisions of hospital transport and termination of resuscitation.

The local counties in my neck of the woods ascribe a significant degree of autonomy to our paramedics, with few protocols dictating a transport decision.  Most common are guidelines for ceasing efforts; such as PEA that remains refractory to all ALS procedures or persistent asystole.  The remainder of arrests are generally worked on scene until ROSC is obtained, we will rarely have a crew bring in an arrest in progress, often due to extenuating circumstances such as family concerns.

Comment on Authors’ Conclusion Compared to SGEM Conclusion: We generally agree with the authors results

SGEM Bottom Line: We do not know if it is better to load and go or stay and play when treating adult patients with OHCAs. 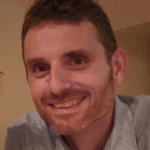 Clinical Application: The most important aspects of adult OHCA care continue to be recognition of a sudden cardiac arrest, activation of EMS, early high-quality CPR and early defibrillation for shockable rhythms.

What Do I Tell the Paramedic? Follow your local protocols (stay and play or load and go). We don’t have high-quality evidence that one strategy is better than the other.

Keener Kontest: There was no winner last episode. The question was what percentage of people working from home, who do drink alcohol are now drinking on a daily basis? The answer according to a recent Nanos poll is 20%. 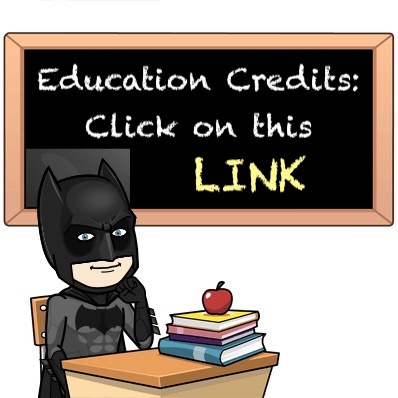 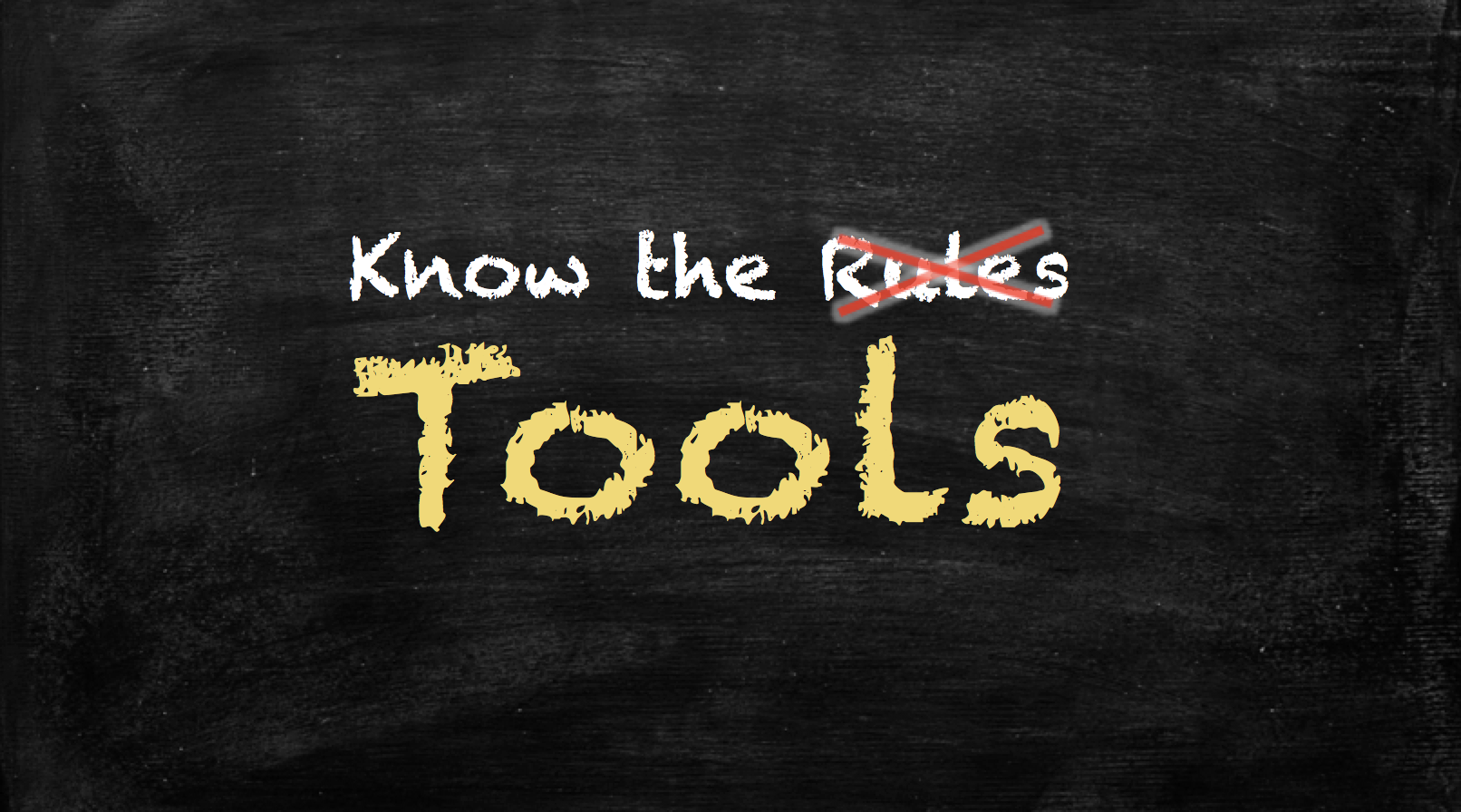 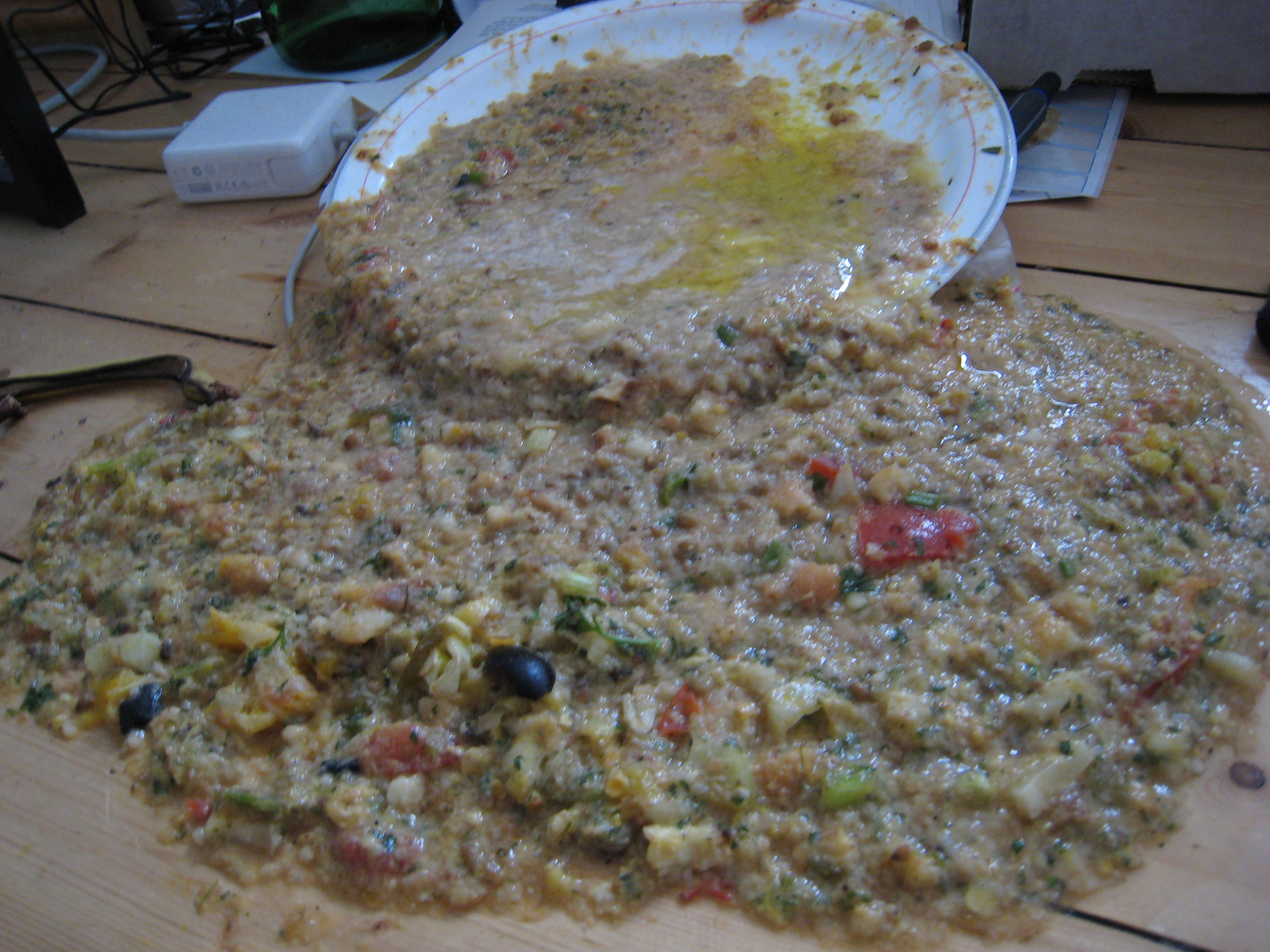 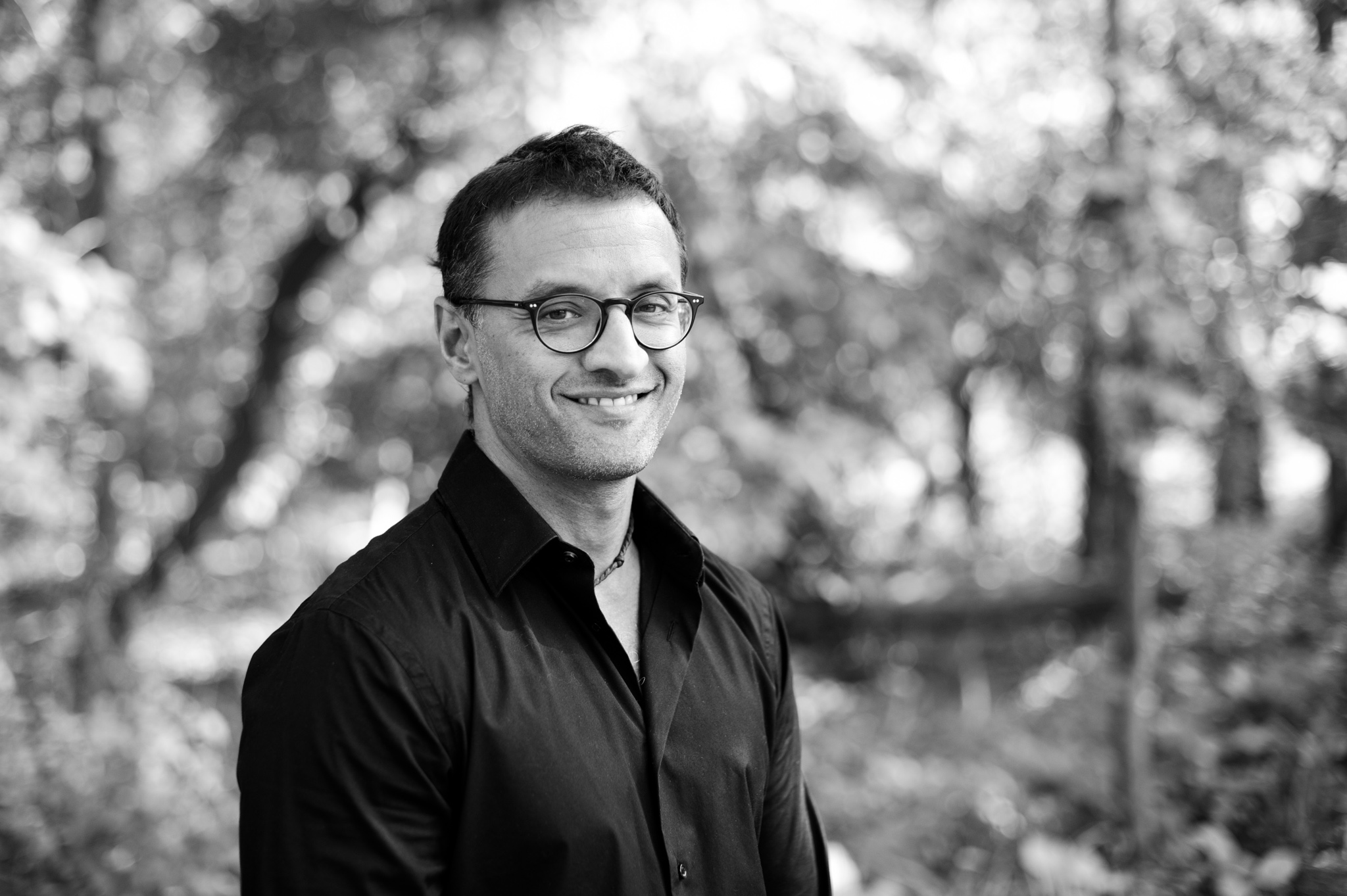 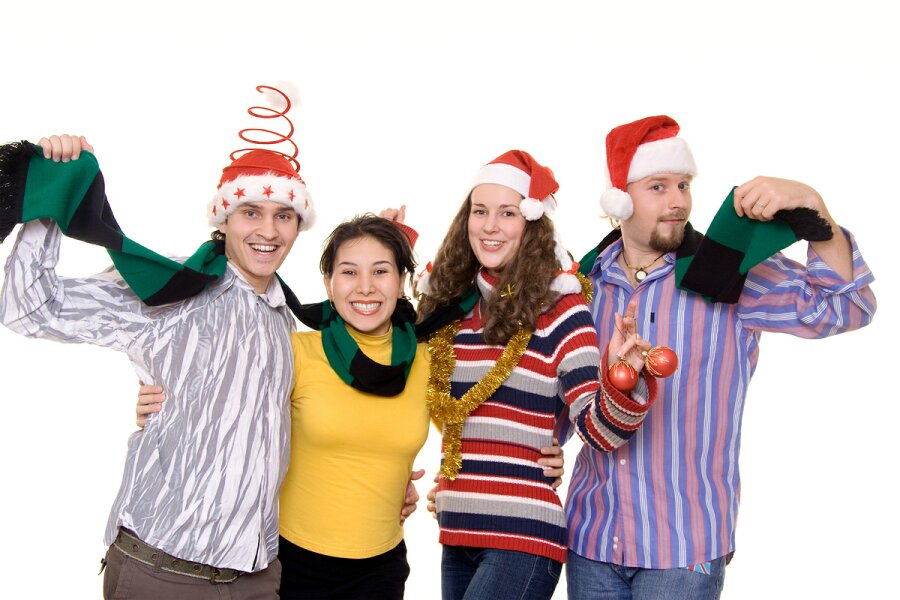