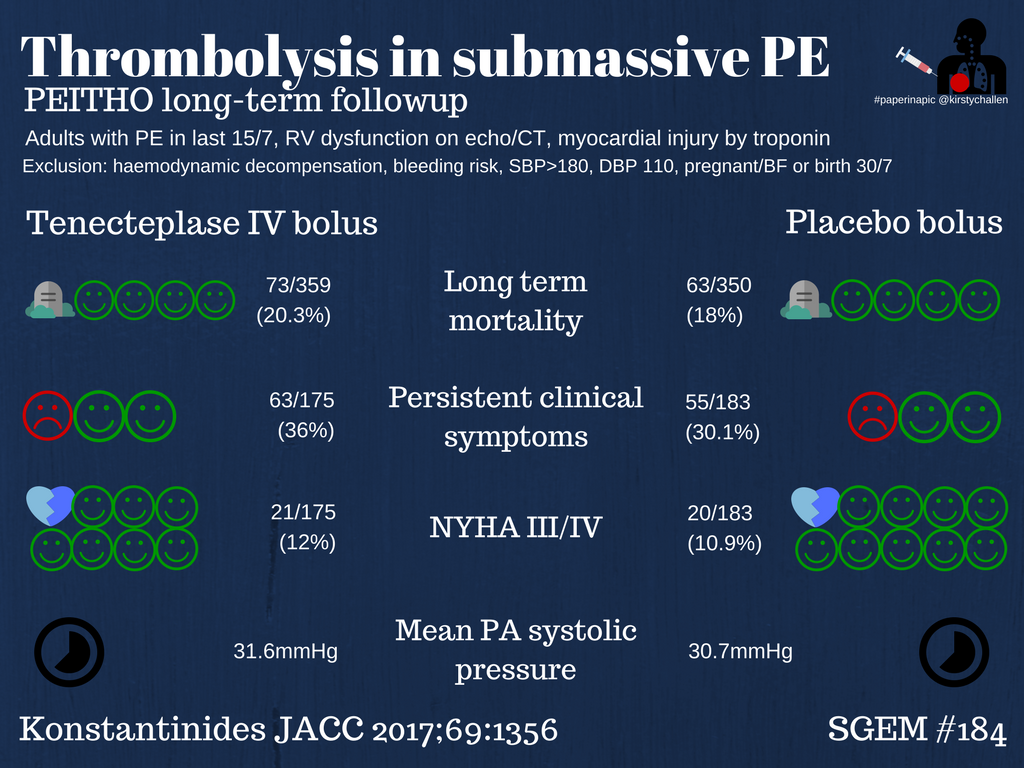 Guest Skeptic: Dr. Kirsty Challen (@KirstyChallen) is a Consultant in Emergency Medicine at Lancashire Teaching Hospitals Trust (North West England). She did her Medical School at Manchester, with a History of Medicine BSc at the same time. Kirsty did her residency in North West England and has a PhD in Health Services Research from Sheffield. Kirsty is also the creator of a knowledge translation project called #PaperinaPic.

Case: A 22-year-old patient presents to the emergency department with sudden onset shortness of breath. She takes the oral contraceptive pill and was placed in a below-knee plaster cast for a fibula fracture 2 weeks ago. She is alert and talking, with a systolic blood pressure of 110 mmHg, but CTPA demonstrates bilateral pulmonary artery thrombus with right ventricular dilatation, and her troponin is raised. When you explain this, she asks if there isn’t something she could have to break up the clot.

Background: We have discussed pulmonary embolism (PE) a number of times on the SGEM. In episode #51 and #126 we talked about managing some patients with PEs at home. Then in episode #163 we shuffled off to Buffalo and discussed ultrasound-facilitated, catheter directed, low-dose fibrinolysis for acute massive or submassive PEs.

The 2015 Chest Guidelines recommend systemically administered thrombolytic therapy in patients with acute PE associated with hypotension (systolic BP<90mmHg) who do not have a high risk of bleeding (Kearon et al 2016). 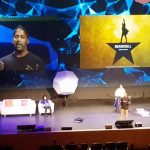 However, we’ve been left not sure what to do about submassive PE – hence the highly memorable Swami vs. Beardsell cage match at SMACCDub.

Previous trials have suggested a reduction in clinical decompensation (MAPPET-3) and long-term pulmonary hypertension (MOPETT) in patients who are given systemic thrombolytics. The largest trial to date was the Pulmonary Embolism Thrombolysis (PEITHO) trial published in the NEJM 2014. It showed an number needed to treat (NNT) of 33 to prevent death or haemodynamic decompensation in the first 7 days but an number needed to harm (NNH) of 11 for major bleeding. The authors of the PEITHO trial conclude:

Authors’ Conclusions: Approximately 33% of patients report some degree of persistent functional limitation after intermediate-risk PE, but CTEPH is infrequent. Thrombolytic treatment did not affect long-term mortality rates, and it did not appear to reduce residual dyspnea or RV dysfunction in these patients.

Key Results: As stated previously they were only able to get about 71% (709/1,005) of the entire study population consented to obtain two-year survival data and prospectively conduct long-term clinical and ECHO follow-up of their patients. The mean age was about 67 years with just over 50% being female.

No difference in all-cause or cause-specific long-term mortality.

1) Were these Emergency Department Patients: From the paper this was not clear, but we reached out to Professor Konstantinides, who confirmed this:

2) Consecutive Recruitment: This is often a problem in emergency medicine research. If you only recruit at convenient times, like daylight hours, it is possible that you get a different patient group.  This could introduce bias and limit external validity. Patients who get out of bed to see us at 4am might be sicker than those who wait till morning. It isn’t explicitly stated in either PEITHO papers or the methodology paper but there isn’t any mention of convenience sampling or restricted researcher hours.

3) Allocation Blinding: This was well done in the initial paper, with placebo that matched tenecteplase and blinding throughout the research team. However, they broke the allocation code to write up the original paper in 2014, so it’s possible that the researchers at the centres who did long term clinical and echocardiographic assessment knew which group the patient was in. This would tend to inflate any benefit of the treatment, though, which makes it less of an issue given their results.

At worst case, all the missing patients in the intervention group could have done really well (maybe they didn’t attend because they were busy skiing across Antarctica?), while all those in the placebo group were so breathless they couldn’t get to clinic. This would leave you with much different results:

5) A Priori: This is another threat to the study validity and is often a problem with outcomes that weren’t considered before the study was started. Ideally, we like to see a preplanned study, powered for long-term outcomes, which is resourced to carry out long-term assessment on all the patients who are randomised. Fortunately the UK national funding network, the NIHR, has recognised this and just issued a call for projects.

SGEM Bottom Line: Systemic thrombolysis in submassive PE cannot be recommended to reduce long-term mortality or morbidity at this time.

Case Resolution: The patient was treated with low molecular weight heparin, and admitted to a high care area so that thrombolysis could be reconsidered if she deteriorated.

Clinical Application: In patients with submassive PE, treat with low molecular weight heparin, unless you can recruit them to a well-designed trial of thrombolysis.

What do I tell my patient? Although it sounds sensible to give you a drug to break up the clot, the evidence we have at the moment is that it will not improve your survival or how well you are in the long term. We may need to reconsider that if your blood pressure drops.

Keener Contest: Last weeks’ winner was David Hedman. He knew the first nationally recognized curriculum for EMS was published in 1969.
Listen to the episode on iTunes to here the question for this week.  If you think you know the answer then send an email to TheSGEM@gmail.com with “keener” in the subject line. The first correct answer will receive a cool skeptical prize. 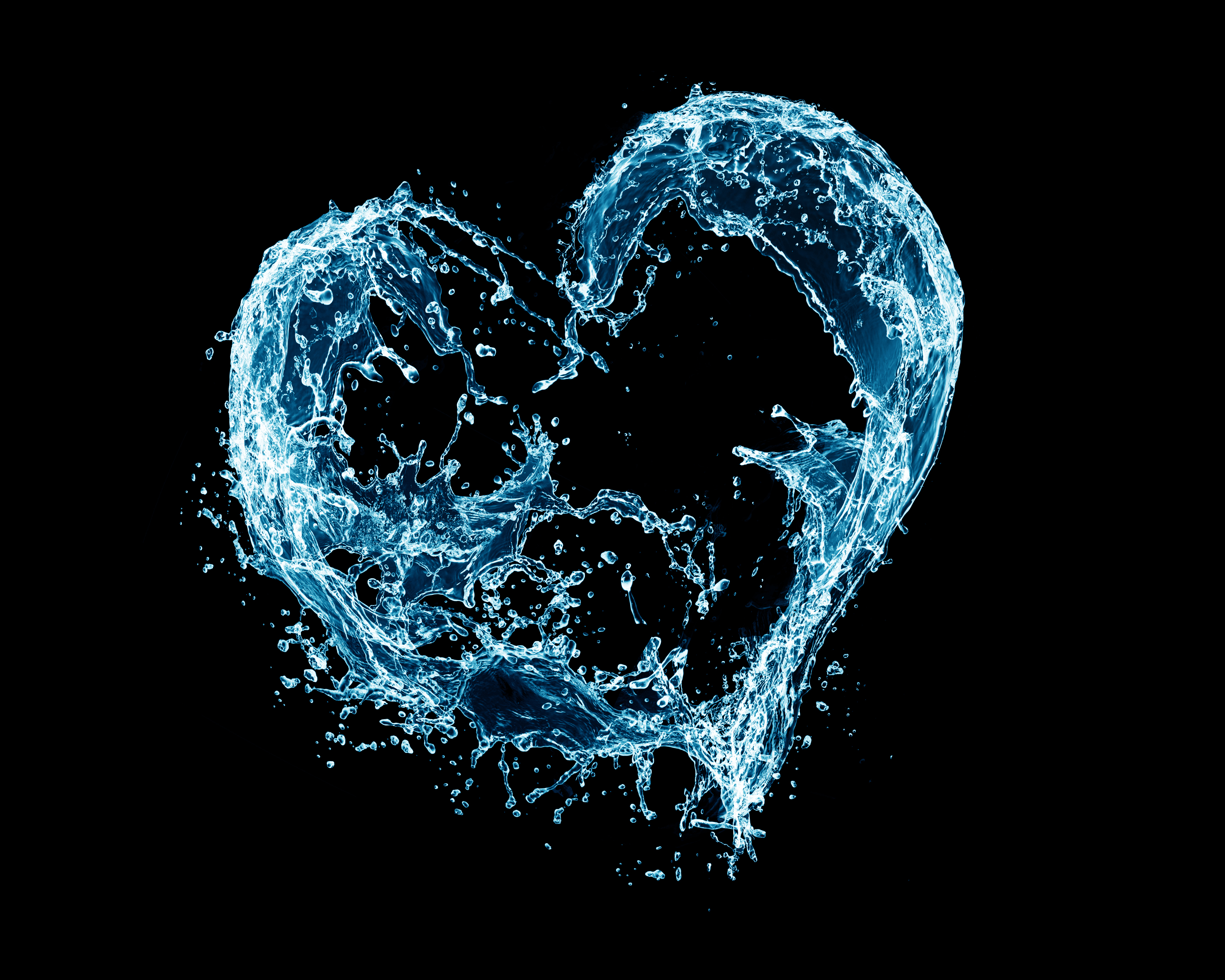 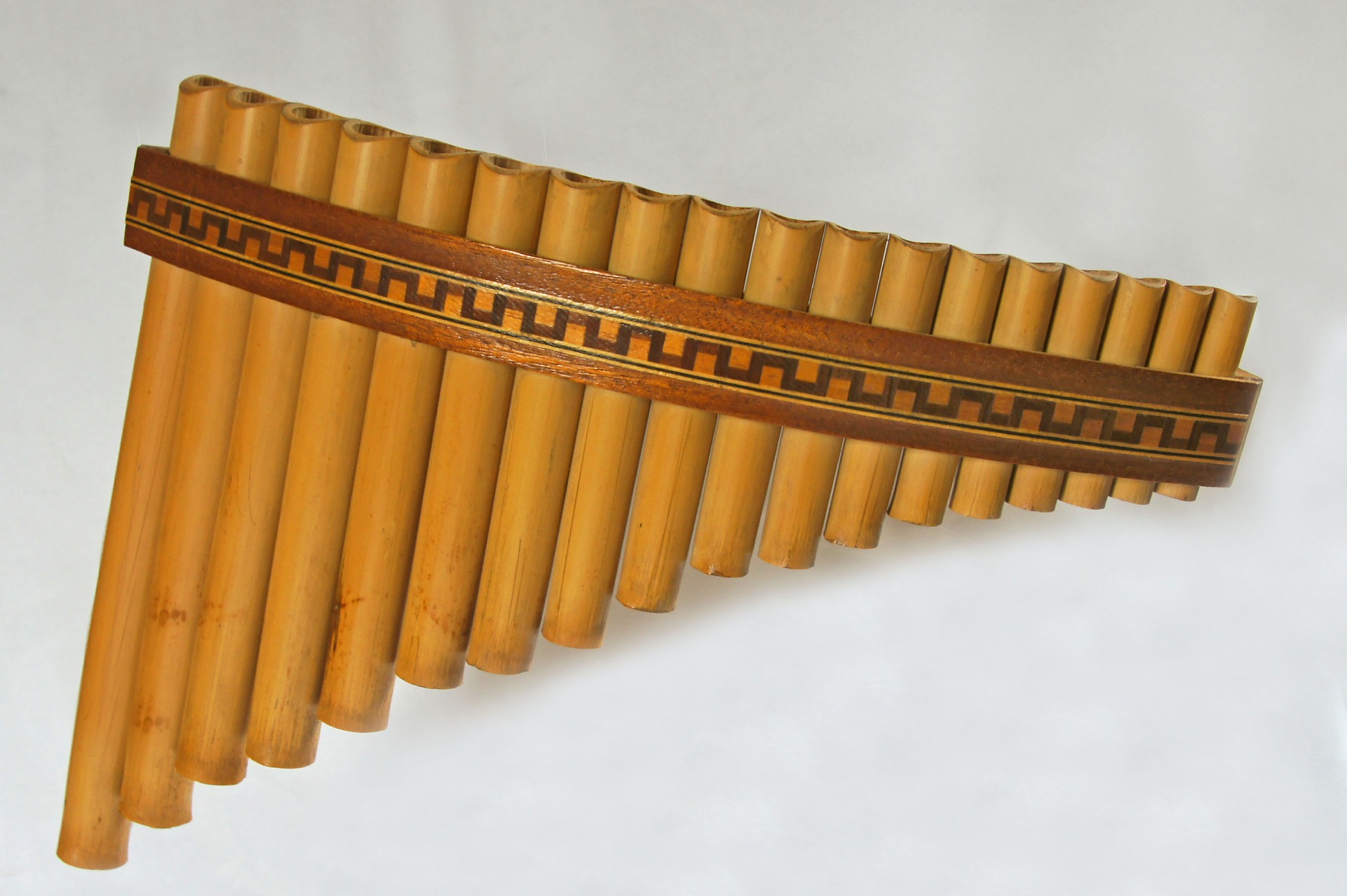 SGEM#181: Did You Ever Have to Make Up Your Mind, Pan Scan or Leave Other Scans Behind? 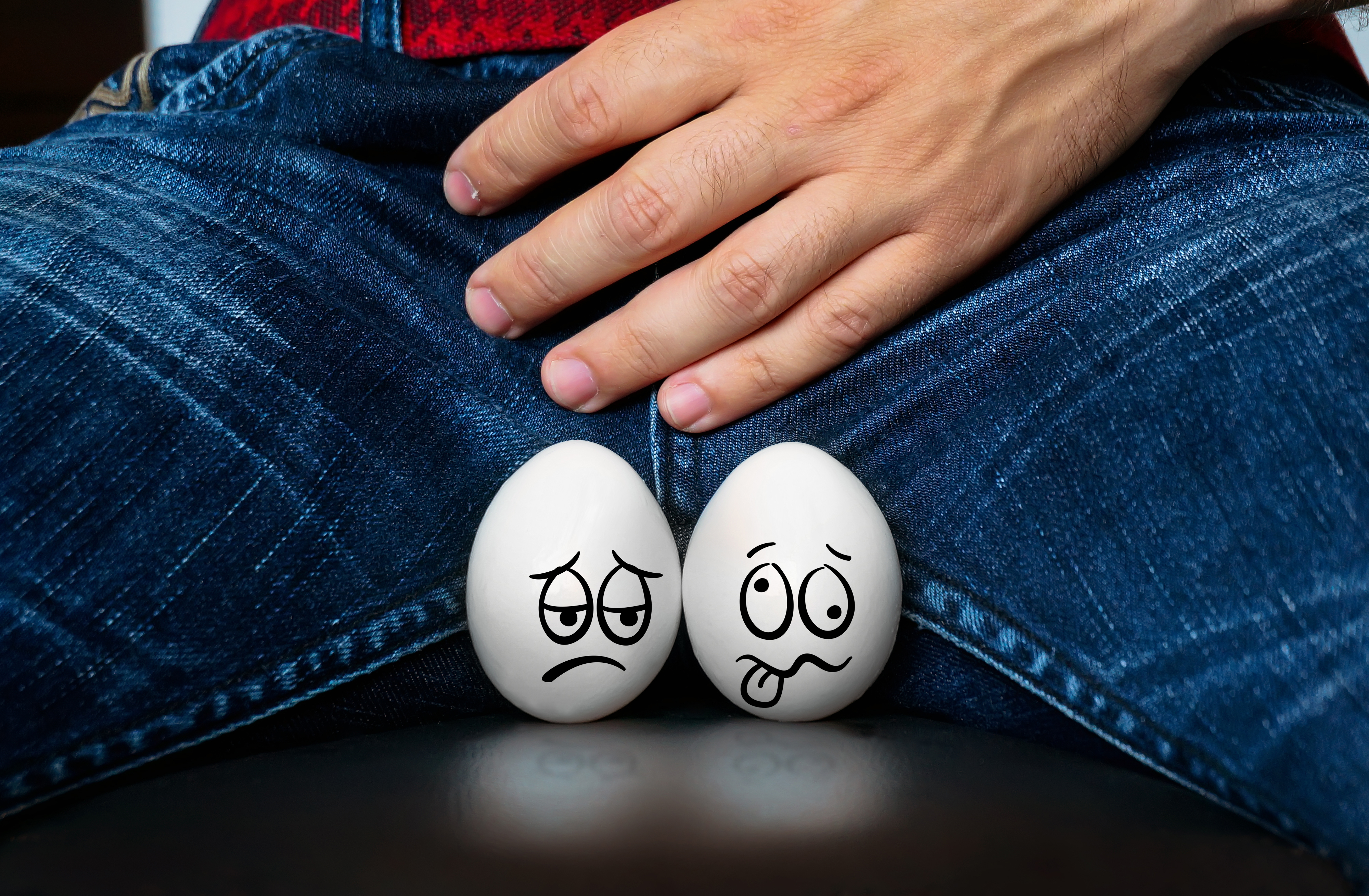