SGEM#110: I Saw the Signs of Angioedema 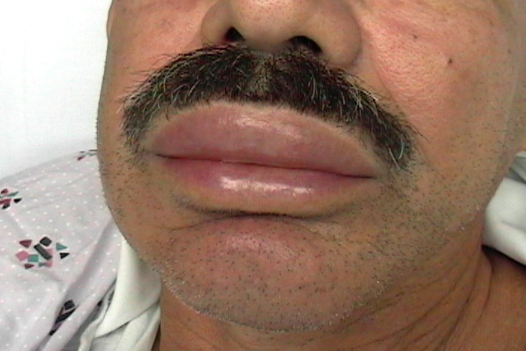 Guest Skeptic: Dr. Eric Schneider. Eric is a Community Emergency Medicine Physician in Kansas City, Missouri, who has a drive to bring the most pragmatic, evidence-based and cost-effective care to his patients at an inner city trauma hospital. He’s a father of three, married to a Pathologist, and an avid musician.

Case: 65yo African American male presents to emergency department complaining of swelling of the tongue/lips. It started when he woke at 08:30. He went to Urgent Care and was treated with intramuscular steroids, benadryl and epinephrine. The swelling did not get any better. The patient was referred to emergency department. Swelling started >4 hours ago when you see him. He states no change in the swelling. On examination is vital signs are normal, no stridor, no respiratory distress, no hypoxia but he does have a swollen tongue and slightly slurred speech. He has a history of hypertension and the only medication he takes is the ACE-Inhibitor Lisinopril. 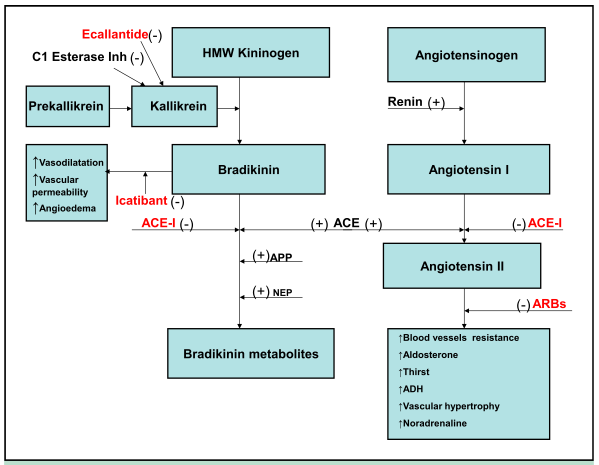 Angiotensin II has many biological effects including:

Angiotensin converting enzyme also breaks down bradikinin. So if you block ACE with an ACE-I you can get a build up of bradikinin.

ACE-I have side effects like all biologic agents. Because it causes lower blood pressure patients can get hypotension causing people to be weak/dizzy and even cause syncope.

Hyperkalemia is another well-recognized side effect of ACE-I. Urinary potassium excretion is stimulated by aldosterone and ACE-I decrease aldosterone. The estimated incidence of hyperkalemia secondary to ACE-I use is approximately 3%.

Then there is the classic ACE-I cough. This is thought to happen from in 5-35% of patients. This chronic dry could can start after the first dose but interestingly can not show up for weeks, months or even years.

No one knows the exact mechanism by which ACE-I cause cough but it is though to be due to the increased concentration of bradykinin, substance P, prostaglandins and thromboxane. Stopping the ACE-I is the treatment but the cough can persist for months in some patients.

The build up of bradykinin is also though to be the mechanism behind angioedema. The incidence of angioedema is seen in up to 0.7 % of users. It is usually self-limiting and has a very low fatality rate. The angioedema occurs in the mucosal tissue of the tongue, lips, eyelids, GI tract or genitalia that all have rich capillary blood supply.

An interesting fact is that angioedema is up to five times more common in those of African descent.

Angioedema can be divided up into two main types:

Again, most patients with ACE-I induced angioedema will have mild swelling, no airway obstruction and will resolve within several hours after stopping the drug.

Antihistamines and steroids are often given for the more serious cases of ACE-I angioedema but probably do not have much impact if any because the problem is bradykinin-mediated.

A new drug called icatibant is a bradykinin type 2 receptor antagonist labeled for use with hereditary angioedema. It blocks bradykinin receptors resulting in a rapid reduction of the edema and can prevent the need for intubating patients with significant airway involvement.

Question: Is icatibant of any benefit in ACE-I associated angioedema?

Authors’ Conclusions: “Among patients with ACE-inhibitor–induced angioedema, the time to complete resolution of edema was significantly shorter with icatibant than with combination therapy with a glucocorticoid and an antihistamine.”

This was a very small study of only 27 patients using icatibant for the off-label use of ACE-I angioedema. Here are five things to consider when evaluating this study:

1) Consecutive Enrolment: We were not sure whether there was consecutive enrolment in this study. This is important to minimize selection bias.

They report three patients had treatment initiated before randomization. Were there other patients that were either too sick or not sick enough who were excluded? They did remove these patients from the efficacy data set and did a per-protocol analysis.

Another point to make about enrollment was all of the patients were Caucasian. ACE-I angioedema is five times more common in patients of African descent. Will they respond differently to icatibant?

2) Blinding: The study was partially un-blinded. Specifically the study drug administrators and the assessors of injection site reactions knew which group patients were assigned. Why were they not blinded? This could introduce some bias when determining whether the active drug or saline subcutaneous injection cause a local reaction. However, the patients and the investigators who assess efficacy outcomes were blinded to treatment groups.

What about intubation or death? This was a much too small study, which they acknowledge, to assess these rare but very important patient oriented safety outcomes.

How about the need for admission? This might be a very patient oriented outcome. What about cost? These drugs cost $5,000-$10,000. Talk about a very expensive drug to use when most cases are mild, self-limiting, resolve in hours and rarely result in airway compromise.

There is a very big risk of indication creep and that everyone with some facial swelling will be treated with this drug rather than those rare patients heading towards airway obstruction.

4) Usual Care: The standard care was IV steroid (prednisolone) and antihistamine (clementine). I wish they had included epinephrine. This is because if someone is crashing or I’m not sure if it is ACE-I vs. anaphylaxis I would give epinephrine a try. I might also consider fresh frozen plasma.

5) Funded by Shire: Shire did not have a role in the study design. However, Shire did review and provide comments on the manuscript before submission for publication. However, just because a study is pharma funded does not mean the results are wrong but it raises my skeptical radar. 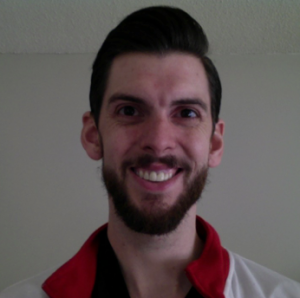 Comment on Authors’ Conclusion Compared to SGEM Conclusion: Icatibant had significantly shorter time to symptom improvement and resolution of edema. What I don’t know is if this therapy will prevent intubation or surgical airways. I can’t generalize to a population of African Descent, who is disproportionately affected. And I can’t necessarily generalize to standard care that may include epinephrine or fresh frozen plasma.

SGEM Bottom Line: Icatibant is an expensive drug that appears to work well for the off-label use of ACE-I induced angioedema but should be reserved for those rare cases of impending airway compromise.

Case Resolution: This gentleman’s swelling had not gone down over a course of a few hours with Epinephrine, Steroids and Antihistamines. He had no respiratory distress. He was not intubated as he had been stable over hours, but given severity of tongue swelling, he was admitted for observation with a trach kit at bedside, with ENT and Anesthesiology aware of him. He had no deterioration, did not require intubation, and went home the following day, knowing not to take any more ACE-inhibitors.

Clinically Application: I am not able to use this clinically because it is not available in places I work.

What Do I Tell My Patient? You have swelling of your tongue, which is likely caused by your medication, Lisinopril. This can occur any time after starting the medicine. There is a medication that may decrease the swelling of your tongue, but I don’t know if it will improve your breathing such that you won’t need your airway protected. Harms of the medicine may include pain, swelling, itching and redness at the injection site. One dose of this medicine costs thousands of dollars.

Keener Kontest: Last weeks’ winner was Dr. Hector Singson from Freeport, Bahamas. He knew that James Wright of the Wright Staining method coined the platelets. This is a back-to-back win for Hector so he will be getting a double strength cool skeptical prize.

Listen to the podcast to hear this weeks keener question. If you know the answer send me email to TheSGEM@gmail.com with “keener” in the subject line. The first person with the correct answer will receive a cool skeptical prize. 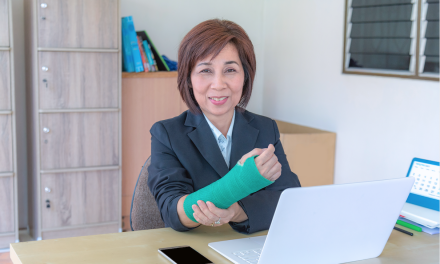 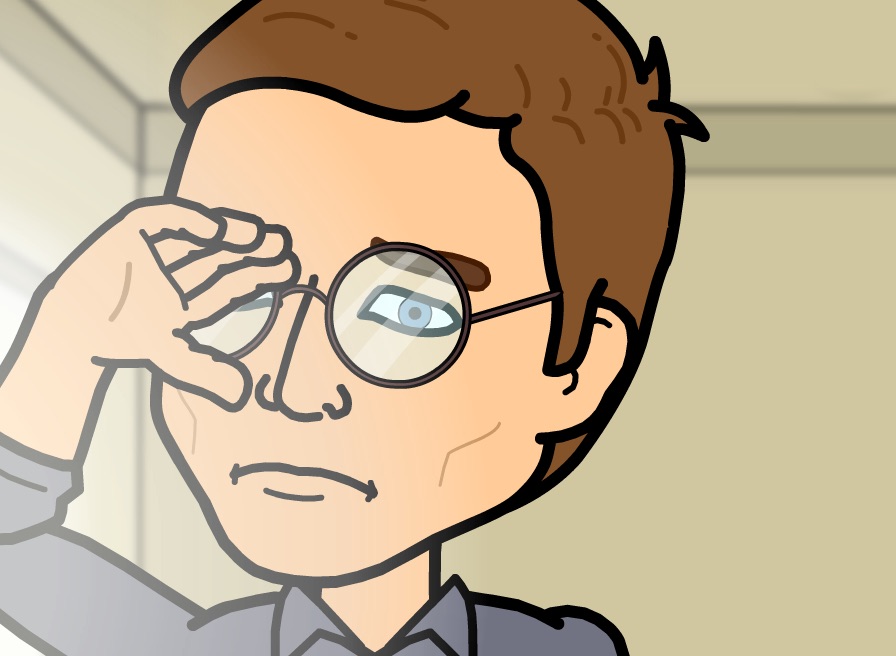 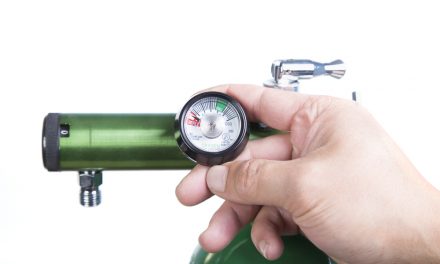 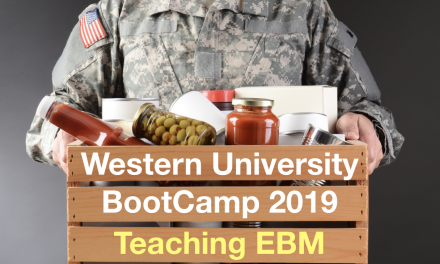